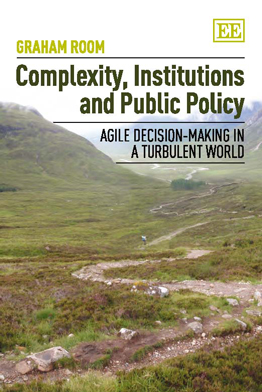 Agile Decision-Making in a Turbulent World

Graham Room argues that conventional approaches to the conceptualisation and measurement of social and economic change are unsatisfactory. As a result, researchers are ill-equipped to offer policy advice. This book offers a new analytical approach, combining complexity science and institutionalism.

8.1 INTRODUCTION In this chapter we complete the conceptual discussion of Part 1. As we have seen, this brings together institutionalism and complexity: two literatures whose intellectual antecedents are quite distinct but whose conceptual convergence is rather striking. There have been three major sources of inspiration on which we have drawn: in physics, evolutionary biology and the social sciences. We began with Newtonian mechanics and its concern with equilibrium and stability. This provided a paradigm of scientific rigour which continues to dominate our thinking: not only in the natural sciences but also, for example, in the mainstream of economics, from where, for better or worse, it casts a wider spell over the social sciences more generally. However, we noticed in Chapter 2 that, from the nineteenth century onwards, engineers and scientists became increasingly aware of systems pushed ‘far from equilibrium’ by flows of energy and matter, but even so capable of producing distinctive structures and patterns of ‘self-organisation’. Self-organisation in ‘far from equilibrium’ systems is by no means confined to the domain of physics and chemistry. It pervades the biological world also. This is in part because each living organism is of course subject to the laws of thermodynamics, as it extracts nutrients and physicalchemical energy from its environment, so as to survive and reproduce. However, as we saw in Chapter 3, the Malthusian ‘struggle for existence’ that Darwin described, while it does not forget the thermodynamics of the living organism, brings centre-stage the population dynamics of selection and adaptation....