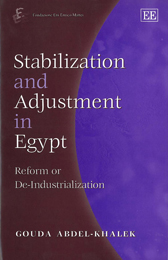 2. Economic ‘reform’ in the 1990s PRELUDE TO ERSAP As already mentioned in the previous chapter, following a series of protracted negotiations starting in 1989, Egypt concluded agreements with both the IMF (in May 1991) and the World Bank (in November 1991) on a stabilization and adjustment package. These made up the core of the reform programme known as ERSAP.1 It may be said that such a package represents, in a real sense, a natural extension of the policies that were adopted since the mid 1970s under the open-door policy (inﬁtah), and the stabilization and adjustment attempts in the 1970s and 1980s. However, it seems to go much further in reworking the institutional fabric of the Egyptian economy to become a truly private enterprise market-oriented economy. We have argued elsewhere (Abdel-Khalek, 1994), on the basis of Egypt’s past experience, that the package failed to take serious account of some important structural features of the Egyptian economy – notably, food deﬁcit, dollarization, and the prevalence of signiﬁcant idle capacity. It was also maintained that the ERSAP package may have followed the wrong sequencing by stressing trade, interest rate and exchange rate ‘reform’ long before dealing with the real economy (in other words, exchange appears to have taken precedence over production). We also argued that the sustainability of the programme could prove problematic in view of the draconian nature of some of the components and the harsh conditionality attached. In addition to the analysis of Chapter 1, several studies of...