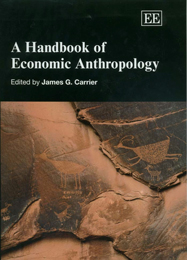 A Handbook of Economic Anthropology

This unique Handbook contains substantial and invaluable summary discussions of work on economic processes and issues, and on the relationship between economic and non-economic areas of life. Furthermore it describes conceptual orientations that are important among economic anthropologists, and presents summaries of key issues in the anthropological study of economic life in different regions of the world. Its scope and accessibility make it useful both to those who are interested in a particular topic and to those who want to see the breadth and fruitfulness of an anthropological study of economics.

Chapter 31: Africa South of the Sahara

Mahir Saul ç The earlier anthropological studies of economy in sub-Saharan Africa were conducted primarily by British scholars, and many were students of Bronislaw Malinowski. A pioneer is Richards, whose library-based thesis on the Bantu peoples of South Africa (1932) advocated Malinowski’s ‘functional method’, with chapters on the ‘need for food’, household organisation, cattle, the lobola system of marriage payments and agriculture. ‘Secondary needs’ such as political structures followed, and then a comprehensive account of ritual and magic surrounding production. Richards’s later fieldwork among the Bemba of Zambia resulted in a better-known book (1939), a touchstone for the description of slash-and-burn or ‘swidden’ agriculture and its matrilineal setting. She described a rural economy undergoing rapid change and increased migration from countryside to town. In a long, prolific career Mair explored the response in East Africa to new technologies and market, becoming a pioneer of applied anthropology (1934, 1969). Goodfellow initiated a sophisticated reflection on the utility of neoclassical economic notions for Africanist anthropology (1939). The interest in migration was important in the work of those at the Rhodes–Livingston Institute in Central Africa (Wilson 1942). Godfrey Wilson, its first director, wrote together with his wife Monica on social change (1945; see also M. Wilson 1964 [1936]). Max Gluckman, a later director, studied the Lozi, including a general account of the economy (1941) and essays on property (1943). He analysed the way land was held and the role of descent groups, using Henry Maine’s idea of a hierarchy of rights. When he...