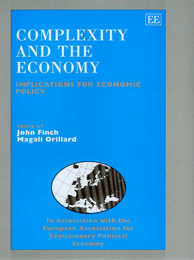 Complexity and the Economy

The authors examine the causes and consequences of complexity among the broadly economic phenomena of firms, industries and socio-economic policy. The book makes a valuable contribution to the increasingly prominent subject of complexity, especially for those whose interests include evolutionary, behavioural, political and social approaches to understanding economics and economic phenomena.

Chapter 6: The Naturalist View of Universal Darwinism: An Application to the Evolutionary Theory of the Firm

J.W. Stoelhorst 1. INTRODUCTION Nelson and Winter’s An Evolutionary Theory of Economic Change (1982) is one of the seminal contributions to evolutionary theories in economics. However, as Hodgson (2003) has recently shown, questions may be raised about the way in which Nelson and Winter use evolutionary concepts. Is the use of concepts from the theory of biological evolution a matter of metaphor or analogy, or are there ontological commonalities between social and biological evolution (Hodgson 2002, 2003)? One of Nelson and Winter’s achievements is that they ground their evolutionary theory more ﬁrmly in the three, core, Darwinian principles of variety, inheritance and selection than their predecessors in economics (Hodgson 1993, 2003). At the same time, however, they are reluctant to admit to more than the use of analogy. Hodgson argues that more than mere analogy is involved in applying evolutionary theory to economics, and that the Darwinian destiny of evolutionary theory in economics is yet to be realized (Hodgson 2001, 2002, 2003). This claim is based on the promise of Universal Darwinism, which holds that the development over time of any open, complex system can be understood in terms of variation, selection and retention (Campbell 1965, 1974; Lewontin 1970; Plotkin 1994; Cziko 1995; Dennett 1995). The purpose of this chapter is to contribute to the effort to ground evolutionary theory in economics in the principles of Universal Darwinism by viewing the ﬁrm as an open, complex system. Following Simon ([1962] 1981), a complex system is seen as a system that...