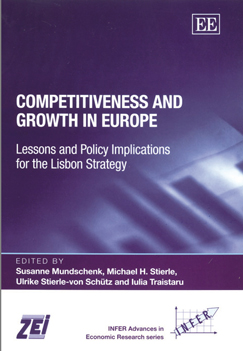 Competitiveness and Growth in Europe

This book contributes fresh theoretical and empirical evidence on competitiveness and growth in connection with the commitment made by European leaders at the Lisbon Summit in 2000 to ‘render the European Union the most competitive and dynamic knowledge based economy in the world by 2010, capable of sustainable economic growth, with more and better jobs and greater social cohesion’.

8. European Productivity Gaps: Is R&D the Solution? Christoph Meister and Bart Verspagen* 8.1 INTRODUCTION Industrialization, and the association between technological advance and economic growth, brought Europe world economic leadership in the 19th century. However, in the course of the 20th century, European leadership was lost to the United States, as well as a number of dynamic Asian economies, of which Japan was the first to emerge in the process of modern economic growth. This loss of European leadership is commonly associated with another major technological change: the rise of the mass production system in the United States (for example, David, 1975). The process of European integration, started after the Second World War primarily as a way of achieving political stability and peace, became a major force towards the realization of economies of scale in the European economies, and hence as a way for Europe to benefit more than it had done before from the mass production system. This had its highpoint in the realization of the ‘Europe 1992’ programme, which created a single European market, without limitations for the free trade of goods and services or the free mobility of people (Tsoukalis, 1997). As a result of this and other factors related to the diffusion of technology, Europe was able to catch-up to the United States over the long postwar period (for example, Abramovitz, 1979, Nelson and Wright, 1992, Pavitt and Soete, 1982), and close some of the productivity gap that had emerged in the first half of...