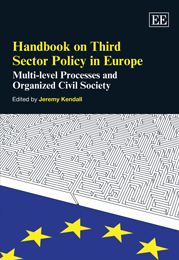 While scholarship on the social, economic and political contributions of organisations existing between the market and the state has proliferated in recent years, no sustained attention has previously been paid to how such organisations are collectively treated by, and respond to, public policy. The expert contributors examine the policy environment for, and evolving policy treatment of, the third sector in the Czech Republic, France, Germany, Italy, Spain, Sweden, the Netherlands and the United Kingdom from a comparative perspective. They also look at how the third sector relates to multi-level European policy processes, including the Open Method of Co-ordination, the Community Method, nationally-led ‘partnership’ approaches within an overall EU framework and the United Nations International Year of Volunteering; an initiative implemented in the EU but originating externally.

Angela Ellis Paine, Jeremy Kendall and Simone Baglioni At the heart of volunteerism are the ideals of service and solidarity and the belief that together we can make the world a better place. In that sense, we can say that volunteerism is the ultimate expression of what the United Nations is all about. (Former UN Secretary-General Kofi Annan)* 15.1 Introduction The most fundamental connection between civil society, the third sector and the United Nations (UN) globally is undoubtedly the endorsement of ‘freedom of association’ as a human right in Article 20 of the 1948 Universal Declaration of Human Rights (UDHR; see Clapham, 2007). However, in contemporary democratic Europe, such a right is ingrained and taken for granted. In this context, the United Nations has instead assumed a relevance for the third sector in another way; through the selection of 2001 as the International Year of Volunteers (IYV) around the world, including Europe. As with other ‘International Years’,1 awareness-raising and sensitizing were key objectives. For IYV, this was to mean the stimulation of a volunteering-oriented policy debate, and the promotion, recognition and facilitation of this activity as an important contributor to social and economic development. This was in line with the UN’s more general, participatory social policy agenda (Deacon, 2007). At the same time, as the epigraph cited at the beginning of this chapter suggests, this seems to have been something more than just another Year from the perspective of that organization’s figurehead at the time. This turns out to...