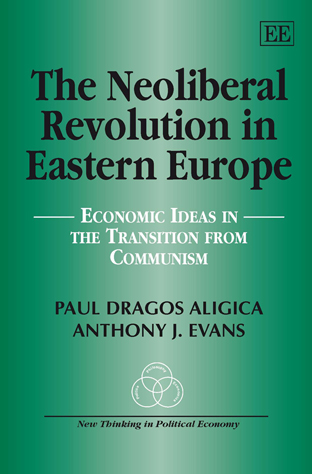 The Neoliberal Revolution in Eastern Europe

Economic Ideas in the Transition from Communism

This unique book develops two different but related research agendas: the study of the spread of ‘neoliberalism’ – as seen from the perspective of Eastern European post-communist evolutions; and the study of Eastern European transition – as seen from an ideas-centred perspective. It challenges a series of misunderstandings and myths about the spread of neoliberal economic ideas in Eastern Europe and offers a clearer understanding of progress since market reform began.

The fast political and economic transition from communism to democracy and market economy in Eastern Europe in the 1990s has been preceded and paralleled by a lengthy and yet unﬁnished transition in the realm of economic and political ideas. This change in the realm of beliefs was the precondition and one of the major forces that set into motion the changes leading to the collapse of the Communist regime and the emergence on its ruins of a liberal order. As economics Nobel Prize winner Douglass North put it: ‘The demise of Communism in Eastern Europe in 1989 reﬂected a collapse of the existing belief system and a consequent weakening of the supporting organizations’ (North, 1997, p. 18). North’s assessment is echoed by other scholars deeply familiar with the region. The transition from the Marxist-socialist way of conceptualizing the political economy system to a new and diﬀerent perspective shaped the attitudes, motivation and political behavior of the Eastern European administrative and political elites (Tismaneanu, 1992). In this process, the economics ‘epistemic community’ – researchers, professors, publicists and specialists in economics – played a pivotal role. In fact, rarely in history has any other social science discipline been elevated to the high status that economics managed to achieve in post-communist Eastern Europe. Yet, despite this salience, very few studies have ventured to explore this shift in economic ideas that seems to be such a critical factor in shaping and understanding the transition process (Kovács, 1994; Risse-Kappen, 1994; Wagener, 1998; Kaase,...