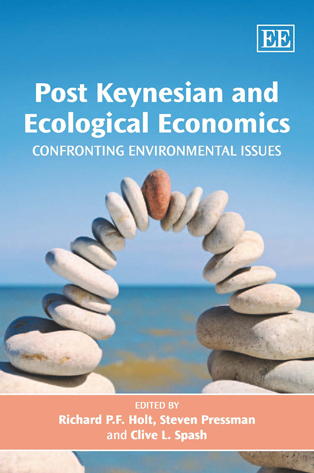 It is argued that mainstream economics, with its present methodological approach, is limited in its ability to analyze and develop adequate public policy to deal with current environmental problems and sustainable development. This book provides an alternative approach. Building on the strengths and insights of Post Keynesian and ecological economics and incorporating cutting edge work in such areas as economic complexity, bounded rationality and socio-economic dynamics, the contributors to this book provide a trans-disciplinary approach to deal with a broad range of environmental concerns.

John Gowdy, Mario Giampietro, Jesus Ramos-Martin and Kozo Mayumi INTRODUCTION1 Economic theory is currently in a state of disarray after the collapse of neoclassical welfare economics (NWE) – the organizing framework that dominated economic theory and policy for the 50-year period following the Second World War (Albert and Hahnel, 1990; Bowles and Gintis, 2000; Colander et al., 2004; Davis, 2006). Devastating theoretical critiques of the Walrasian system have been made for decades. Indeed one could argue that the critics have won decisively every major theoretical battle (King, 2002). Yet until recently the NWE model continued its dominance because its supporters simply ignored the mounting theoretical paradoxes and inconsistencies that helped ultimately to undermine the system. The overwhelming dominance of neoclassical economists in the most prestigious universities and on editorial boards of the most prominent journals also helped to maintain the oligopoly of Walrasian theory throughout the later part of the twentieth century (Hodgson and Rothman, 1999). The NWE model finally began to crumble in the face of overwhelming empirical evidence that the basic behavioral model, Homo economicus, offered a poor description of actual human behavior (Gintis, 2000; Henrich et al., 2001; Sen, 1977) and that it led to erroneous predictions and policy disasters (Kahneman, 1994; Stiglitz, 2002). The empirical assault was ultimately more successful than the theoretical one because it confronted the neoclassical paradigm on its own terms using its own criteria (Gowdy, 2004). It is fair to say that the majority of top economic theorists today reject the core assumptions...