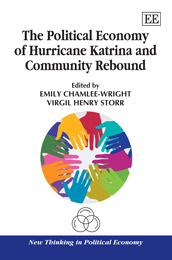 The Political Economy of Hurricane Katrina and Community Rebound

In 2005 Hurricane Katrina posed an unprecedented set of challenges to formal and informal systems of disaster response and recovery. Informed by the Virginia School of Political Economy, the contributors to this study critically examine the public policy environment that led to both successes and failures in the post-Katrina disaster response and long-term recovery. Building from this perspective, this book lends critical insight into the nature of the social coordination problems disasters present, the potential for public policy to play a positive role, and the inherent limitations policymakers face in overcoming the myriad challenges that are a product of catastrophic disaster.

Chapter 9: Lessons from Post-Flood Recovery of New Orleans and Prague

1 Leonid O. Krasnozhon and Daniel M. Rothschild 9.1 INTRODUCTION The ability of cities to respond to and rebuild after natural disasters or other exogenous shocks is significant to understand the ways in which the public and private sectors interface and cooperate, both under normal conditions as well as in times of crisis. This chapter employs a comparative case study methodology that examines the policy responses of two major cities after early twenty-first century floods and evaluates the different policy priorities and the relevant responses of the private sector to these actions. Both New Orleans and Prague were severely inundated in the first decade of the twenty-first century. In 2002 the Czech capital, Prague, was hit by the largest flood in Europe in the last century, the so-called flood of the millennium (in Czech, the tisíciletá voda).2 Three years later New Orleans, Louisiana, was almost destroyed by Hurricane Katrina, a category three hurricane that caused the city’s flood defenses to fail and innundated some 80 percent of the city. There are myriad ways in which a disaster can damage a city, many of which are not manifested through physical destruction. In addition to the damage to and destruction of buildings and public spaces which immediately come to mind, natural disasters frequently damage critical infrastructure, disrupt economic activity, and disturb the complex interdependent web of human relationships both with each other and with the built environment that characterizes a city’s raison d’être. For millennia, planners and engineers have...