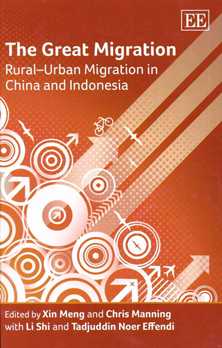 Rural–Urban Migration in China and Indonesia

This fascinating study compares and contrasts the immense internal migration movements in China and Indonesia. Over the next two decades, approximately two-thirds of the rural labour force is expected to migrate, transforming their respective societies from primarily rural to urban based.

Chapter 1: The Great Migration in China and Indonesia: Trends and Institutions

Xin Meng and Chris Manning 1 THE RURAL-URBAN MIGRATION IN CHINA AND INDONESIA PROJECT Economic growth almost inevitably leads to a substantial movement of labour from rural primary industry to secondary and tertiary industries in the cities. This movement is essential to foster growth and to spread rising income more evenly across the population. It is thought to benefit both those who migrate and those who remain behind. As a result, rural-urban migration is often regarded as one of the most effective ways to reduce rural poverty and increase agricultural productivity. Industrialization and urbanization almost always go hand in hand. Most countries in the developed world experienced large-scale rural-urban migration during the process of economic growth. In the United Kingdom, for example, less than 27 per cent of the population lived in towns with more than 5,000 inhabitants in 1801, but 100 or so years later the proportion had increased to 60-70 per cent (Brown 1991). In Japan, more than 80 per cent of the labour force worked in the agricultural sector between 1878 and 1882, but by 1979 the ratio had dropped to 11 per cent (Moriya 1963: 238-9; Sorensen 2004). A similar process is occurring in China and Indonesia at a much faster speed. Twenty to thirty years ago, both were largely agricultural societies. In 1980, only 19 per cent of the total population of China, and 22 per cent of the total population of Indonesia, inhabited cities; by 2005, the rates had reached 47 per cent...