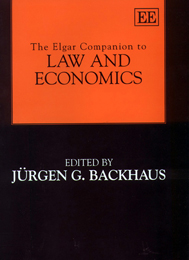 The Elgar Companion to Law and Economics

This authoritative and comprehensive reference work introduces the reader to the major concepts and leading contributors in the field of law and economics. The Companion features accessible, informative and provocative entries on all the significant areas and breaks new ground by bringing together widely dispersed but theoretically congruent ideas for the first time.

Nicholas Mercuro, Steven G. Medema and Warren J. Samuels Introduction’ Robert Lee Hale was born in New York in 1884. His secondary school education was undertaken in New York and Connecticut, and thereafter he spent one year studying in Germany. He returned to the United States and entered Harvard College, where he studied economics, graduating with a BA in 1906 and an AM in 1907. While studying at Harvard, he served as an assistant to one of the leading figures in orthodox economics, Frank W. Taussig. The next year he entered Harvard Law School, receiving an LLB in 1909. After working at a Chicago law firm and then as a clerk in the legal department of AT&T in New York, Hale enrolled at Columbia University, where he earned a PhD in economics in 1918. As a graduate student at Columbia, he regularly taught courses in the Economics Department. In 1919, the year after he earned his PhD in economics, Hale was invited by Dean Harlan Fiske Stone to teach at Columbia Law School and, as a consequence, Hale was subsequently (in 1922) awarded a joint lectureship in the Economics Department and at the Columbia Law School. He was formally invited to join the law school on a full-time basis in 1928 as an assistant professor of legal economics. He was made full professor in 1935 and retired as professor emeritus in 1949. Hale died on 31 August 1969. Robert Lee Hale can perhaps best be described as a legal...