Unidroit is designated as the Depositary under the Cape Town Convention and each of its four Protocols (Aircraft, Rail, Space and Mining, Agricultural and Construction (MAC)). Given the complexity of the systems of declarations and notifications under these instruments, the Depositary functions are particularly important. They are set out in each instrument. For example, Article 62 of the Convention provides that instruments of ratification and accession are to be deposited with Unidroit, and that Unidroit is to provide Contracting States with notification of each new ratification or accession and withdrawal or amendment of declaration, and provide notifications and copies of instruments to the Supervisory Authority and the Registrar of the International Registry.

Unidroit provides assistance to intending or potential Contracting States by way of providing information on the ratification/accession process, and assistance in relation to the drafting of instruments of ratification/accession and declarations. For example, Unidroit has produced guides on Model Instruments of ratification and accession, and a Memorandum containing information and model forms for the making of declarations under the Convention and Protocols. These documents do not venture into the policy choices to be made by Contracting States, and in its capacity as Depositary Unidroit is not able to provide advice to States in relation to their policy choices.

The Depositary is required to prepare regular reports on the manner in which the international regime established by the Convention has operated in practice. These reports, which are provided to Contracting States and posted on the Unidroit website (www.unidroit.org/depositary-2001capetown), are issued every two years so as to coincide with the reporting cycles of the Supervisory Authority.

When notified of an error or lack of concordance in the language authentic versions of the Convention and/or its Protocols, the Depositary opens, in accordance with Article 79 of the 1969 Vienna Convention on the Law of Treaties, a procedure of correction of such errors or of a lack of concordance.

In addition to its formal Depositary functions, Unidroit hosted visits by Government officials to discuss the requirements for ratifying or acceding to the Convention and its Protocols, to supplement advice provided through website resources. It has also been involved in a number of promotion activities and seminars which have been designed to advance awareness and understanding of the Cape Town Convention regime. For the activities undertaken in 2019 and 2020, see the Unidroit Annual Reports 2019 and 2020 which can be found on the Unidroit website at www.unidroit.org/english/governments/councildocuments/2020session/cd-99-b/cd-99-b-02-e.pdf and www.unidroit.org/english/governments/councildocuments/2021session/cd-100-b/cd-100-b-02-e.pdf.

Status of the Convention and Protocols

Annexes 1 and 2 hereto are tables listing the Contracting States and Regional Economic Integration Organisations to each instrument as at 31 December 2019 (Annex 1) and at 31 December 2020 (Annex 2).

The small difference in the number of Contracting States for the Convention and the Aircraft Protocol is explained by the fact that a number of States have only deposited an instrument of ratification/accession in respect of the Convention and have not also deposited an instrument in respect of a Protocol, or have not deposited a declaration pursuant to Article 54(2) of the Convention (the making of a declaration pursuant to that Article is a mandatory requirement that must be fulfilled before a State is able to ratify or accede to a Protocol). Being a framework Convention, it is designed to operate in conjunction with a Protocol.1

The Convention and the Aircraft Protocol (and, subsequently, the Rail, Space and MAC Protocols) were developed with a view to ensuring that their provisions would be capable of being adopted by States in all geographic regions, irrespective of the type of legal system. In this regard, the Convention and Aircraft Protocol have been extremely successful, with their Contracting States to date being drawn from all regions of the world and representing States at all levels of economic development and a broad range of legal systems. The Convention is also the most successful treaty – in terms of the number of ratifications – to have been developed by Unidroit.

In relation to the Rail Protocol, a Preparatory Commission was set up by Resolution No 1 of the Luxembourg diplomatic Conference for the establishment of an International Registry under the Luxembourg Protocol.

The Ratification Task Force set up by the Rail Preparatory Commission planned a detailed ratification strategy and an intense agenda for its work for the purpose of reaching within a reasonable timeframe the number of adhesions required for the entry into force of the Protocol and the operability of the International Registry. Most meetings of the Ratification Task Force are held several times a year via teleconference. The most recent meeting was held Berne on 16 July 2019 to take stock of the current status of the ratification processes in various interested States.

Together with the Rail Working Group, Unidroit participated in 2019 and in 2020 to a number of important events in different countries to promote the Rail Protocol (see Annual Report 2019 and Annual Report 2020).

In relation to the Mining, Agricultural and Construction Protocol (MAC Protocol), a Preparatory Commission was set up by Resolution No. 1 of the Pretoria diplomatic Conference to act as Provisional Supervisory Authority until the Protocol enters into force and for the establishment of an International Registry under the MAC Protocol. The Commission operates under the guidance of the Governing Council and General Assembly of Unidroit.

The benefits to be derived by a Contracting State may depend upon which declarations it has made. For example, the OECD Aircraft Sector Understanding under the Arrangement on Officially Supported Export Credits incorporates a material discount for certain aircraft backed export credit provided to a borrower in a State that has ratified the Cape Town Convention and Aircraft Protocol, but only if that State has also made the ‘qualifying declarations’ that are specified in the Understanding and implemented them so as to prevail over other national law.2

Copy this link, or click below to email it to a friend
Email this content
or copy the link directly:
The link was not copied. Your current browser may not support copying via this button.
Link copied successfully 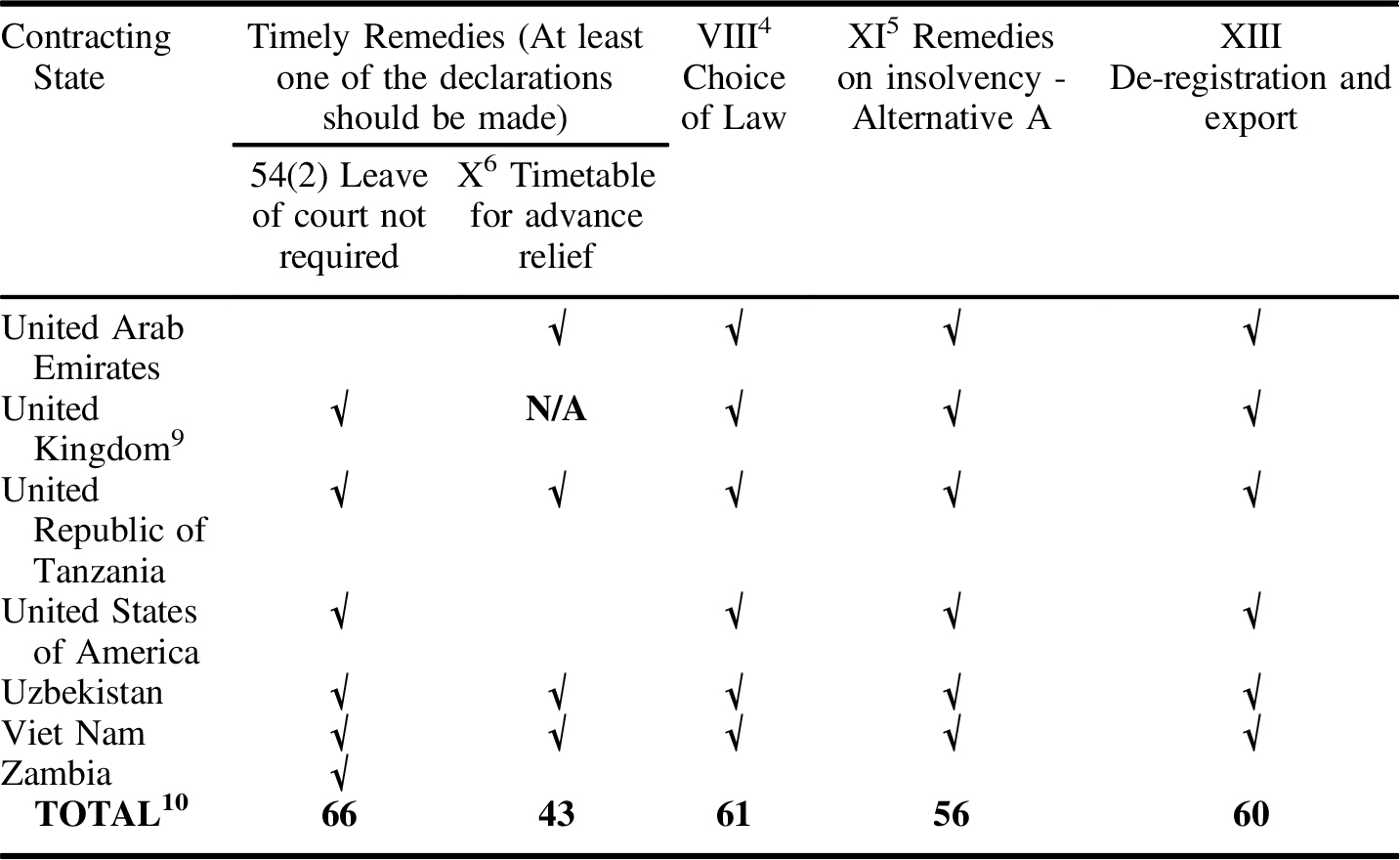