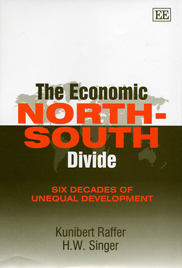 The Economic North–South Divide explores the structural roots of the debt crisis and considers the impact of debt management on North–South economic relations, exposing certain double standards that tilt global markets further against the South. Encouraged by recent successful opposition to neoliberalism, the authors finally propose ideas for a world where people seem to matter.

Chapter 11: Too Little, Too Slowly: Dragging the Debt Problem into the Third Millennium

While the 1980s became known as the ‘lost decade’, the 1990s began with officially heralded hope and recovery, if not for all debtors, at least for those having adopted ‘prudent’ economic policies. Latin America was used, with an occasional, cautious caveat regarding sustainability, as a practical vindication of adjustment policies based on the Washington Consensus. In 1991, the Inter-American Development Bank’s report, Social and Economic Progress in Latin America titled its first part, ‘The Nineties: A Decade of Hope’. In spite of a GDP per head at the level of 1977 and a drastic fall in standards of living not experienced in the region for half a century, it thought greater optimism for this decade justified (IDB, 1991, p.5). The following report of 1992 starts with the ominous formulation, ‘The Recovery Begins’ (IDB, 1992, p.1) strongly recalling the famous ‘Recovery has begun’ (World Bank and UNDP, 1989, p.iii), used to herald economic recovery in sub-Saharan Africa (SSA). In its World Debt Tables 1992/93, the World Bank (WDT, 1992, p.3) concludes with regard to ‘a number of’ Latin American countries: ‘With debt indicators now back to pre-1982 levels, most of these countries are emerging from the debt crisis, helped in some cases by the catalytic effects of reductions in their commercial bank debt.’ It was fast becoming generally accepted wisdom according to the Bank (ibid., p.41) that the resumption of large capital flows into some Latin American countries heralded the end of the debt crisis. For ‘commercial banks and some of...