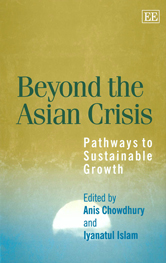 Beyond the Asian Crisis

As Southeast and Northeast Asia recover from the Asian crisis and return to a state of growth, the authors of this book assess the lessons to be learned from the crisis to achieve sustainable development in the future. While the importance of each factor contributing to the crisis varies from country to country, their collective experience has created unprecedented turmoil in current thinking on development policy.

Leong H. Liew1 INTRODUCTION Interest in China’s political change and its progress towards democratization2 is strong. There is a considerable literature on this topic. The bulk of it is written largely from a political science perspective that examines the impact of Chinese economic reform on the development of civil society (for example, He, 1997; Unger, 1996; White et al., 1996), legal reform (for example, Pei, 1997; Tanner, 1994) and political governance (for example, Kelliher, 1997; O’Brien, 1994). Possibly because the literature is largely written from a political science perspective, its primary focus is on how economic reform and the resulting economic growth have aﬀected the process of democratization in China. The cross-country evidence that democracy is positively correlated with economic growth is overwhelming (Diamond, 1992: 466; Przeworski and Limongi, 1997: 156). But does the positive correlation between democracy and economic growth mean a causal relationship between the two variables? And if it does, what is the direction of this causality? Does economic growth promote democracy or does democracy promote economic growth? Or is the relationship symbiotic? This chapter explores these questions with regard to contemporary China. It argues that early moves towards democratization in the post-Mao reform era were due more to a speciﬁc cause of economic growth – marketization of the economy – than to economic growth per se. Since marketization3 is responsible for the impressive growth rates in the reform era, it can easily be mistakenly concluded that economic growth is driving the process of democratization forward. This...