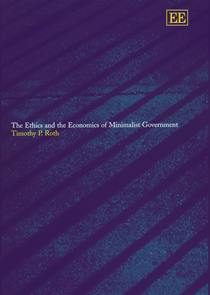 The Ethics and the Economics of Minimalist Government

Because it is technically flawed and morally bankrupt, the author argues, the economist’s consequence-based, procedurally detached theory of the state has contributed to the growth of government. As part of the Kantian–Rawlsian contractarian project, this book seeks to return economics to its foundations in moral philosophy. Given the moral equivalence of persons, the greatest possible equal participation must be promoted, persons must be impartially treated and, because it is grounded in consequentialist social welfare theory (SWT), the economist’s theory of the state must be rejected. Ad hoc deployment of SWT has facilitated discriminatory rent seeking and contributed to larger government. In contrast, this book argues that equal political participation and a constitutional impartiality constraint minimize rent seeking, respect individual perceptions of the ‘public good’ and underwrite the legitimacy of government. Economists, moral philosophers and political scientists will find this book a unique contribution to the literature.

2.1 CONSEQUENTIALISM AND THE MORAL FORCE OF RIGHTS Ethical theories are typically characterized as theories of the right or theories of the good (Goodin 1993, p. 241). As we have seen, contractarians do not start with a concept of the good, given independently of the right. In particular, Kantian/Rawlsian contractarians begin with a conception of the right, the moral equivalence of persons. Given this, they specify permissible ends and the constitutions which are right and just. In sharp contrast, consequentialists begin with a theory of the good and insist that that good ought to be promoted (Pettit 1993, p. 231). It is in this spirit that utilitarianism – the theory of the good which is most standardly employed to ﬁll out the consequentialist framework – insists that the right action is that which maximizes utility summed across all those affected by the action. While much can be said about this, immediate interest centers on an elementary idea: Whether expressed in hedonistic, preference or welfare form (§ 3.1), utilitarianism cannot respect the moral force of rights. To see this, consider ﬁrst that there is a taxonomy of rights: While they may be active, conveying a right to do things, they may also be passive, contemplating rights to have things done for or to one. More broadly, the differences among them subsume rights as claims, as powers, as liberties and as immunities. However, the ‘dominant meaning may well be “claim”, and in this, which is also its narrowest sense, it is the correlative of “duty...