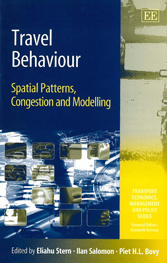 Travel Behaviour is a challenging and original volume, adding to the growing literature focusing on understanding transportation systems. The book capitalises on actual scientific and applied developments in Europe, the importance of EC policies and the resultant trend in studying differences between North American and European research.

Eliahu Stern 1. INTRODUCTION Several studies have provided empirical evidence of the existence of thresholds in the decision-making process of commuters experiencing daily congestion. In 1979, Hutchinson and Dudeck (1979) found that drivers respond to varying lengths of expected delay in a positive and non-linear way. Later, Mahmassani et al. (1990) provided evidence of ‘indifference bands’, or thresholds, in commuters’ travel choices. A more deﬁnitive result was presented by Khattak et al. (1993), who investigated delay thresholds by incorporating length of expected delay in their route diversion choice model. They found that drivers are more likely to divert if the expected delay time is at least 20 minutes. A mode-choice model developed by Koppelman et al. (1993) produced a set of threshold values representing boundaries of van pool intensity that affect modal switch intentions. Another quantitative indication of a threshold was found by Stern and Nasrin (1994). In this study, whenever there was an option to deviate from a congested road in the Tel Aviv metropolitan area, it was most likely that drivers would suffer a delay of at least 10 minutes before deviating. Later, Mahmassani and Rong-Chang (1998) developed speciﬁcations of indifference bands of schedule delay that govern both route and departure time choices. They showed that indifference bands are not constant over time, that older commuters are likely to tolerate greater schedule delay than younger ones, and that female commuters generally exhibit wider indifference bands than males. Finally, thresholds, either determined empirically or simply set to...