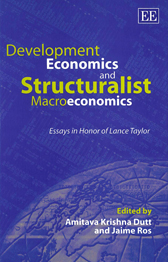 Essays in Honor of Lance Taylor

Lance Taylor is widely considered to be one of the pre-eminent development economists in the world and is known for his work on development planning, macroeconomics of development, stabilization policy, and the global economy. He has also been the major force behind structuralist economics, which is seen by many to be a major alternative to orthodox development economics and policy prescriptions. The essays in this volume, written by well-known scholars in their own right, make contributions to each of these areas while honoring the contributions made by Lance Taylor.

Chapter 14: 'Getting the structure "right"': upscaling in a prime latecomer

14. ‘Getting the structure “right”’: upscaling in a prime latecomer Alice H. Amsden and Wan-Wen Chu Lance Taylor’s work, unlike that of most economists, has been oriented towards ‘getting the structure “right”’ as opposed to ‘getting the prices “right”’ or even ‘getting the institutions “right”’. The structure of an economy comprises both sets of prices and institutions, but involves more. It encompasses interactive sub-systems at the micro and macro levels that inﬂuence the rate of growth, such as the sectoral composition of production, who saves and who invests, patterns of productivity change and trends in employment. The ‘right’ macro prices (of the real wage, interest rate and exchange rate) are not absolute, but must conform with the speciﬁcities of any given economy’s structure. Thus, the ‘right’ exchange rate from the typical economist’s viewpoint may be ‘wrong’ in an economy with a large raw material export sector that is suﬀering from Dutch Disease. The ‘right’ institution (clear and well-deﬁned property rights, for instance) may be ‘wrong’ in an economy that is undergoing radical structural adjustment, with ﬁrms inventing the most useful organizational forms as they go along (as in the town and village enterprises of post-reform China). ‘Getting the structure “right’’’ is thus a lifetime intellectual, technical and participatory venture involving theory and practice, at which Lance Taylor has excelled. In honor of Taylor’s work, this chapter addresses the question of how latecomers upscale into more technologically complex industries and commercially demanding services...