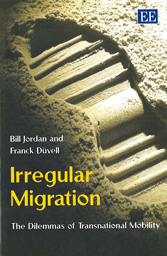 The Dilemmas of Transnational Mobility

Irregular Migration is an extremely timely and topical book, analysing the fundamental tensions at the core of present attempts to manage the movement of population in today’s world. Recent events around the globe have prompted a reappraisal of the emerging consensus on migration control.

The Dilemmas of Transnational Mobility

After the UK general election of 2001, a remarkable consensus among the political parties emerged about a crisis in the country’s public services. Not only was the Labour government committed to a large increase in spending on the public infrastructure as an investment for the future; the Conservative opposition too announced that it saw public service regeneration as more important than cuts in taxation. The Liberal Democrats had been campaigning during the previous two elections for priority to be given to improving public services. This chapter investigates the impact of irregular migration upon these services, and the responses of staff in them. In the popular press, one of the strongest and most emotional complaints about the rise in asylum seeking in the 1990s was that it was a drain on national revenues, through the beneﬁts and services provided. The UK was claimed to be a ‘soft touch’, and its welfare state a ‘magnet’ for people from poorer countries, who were basically economic migrants. One of the reasons for the deterioration in the public services was, so it was claimed, the excessive demands made upon them by these foreigners. In the more favourable interpretation of economic migration that began to be disseminated by government circles in 2000, this version started to be challenged. … an initial analysis for the UK suggests that migrants contribute more in taxes and National Insurance than they consume in beneﬁts and other public services. We estimate that the foreign-born population contributes around 10 per cent...