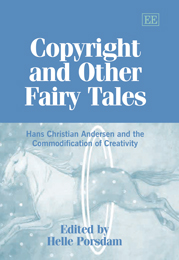 Copyright and Other Fairy Tales

Hans Christian Andersen and the Commodification of Creativity

The present state of copyright law and the way in which it threatens the remix of culture and creativity is a shared concern of the contributors to this unique book. Whether or not to remain within the underlying regime of intellectual property law, and what sort of reforms are needed if we do decide to remain within this regime, are fundamental questions that form the subtext for their discussions.

Michael Blakeney THE PROTECTION OF TRADITIONAL CULTURAL EXPRESSION IN THE INTERNATIONAL INTELLECTUAL PROPERTY ARENA Probably the first step towards establishing a political agenda for the protection of traditional cultural expressions was an African Study Meeting on Copyright, held in Brazzaville in August 1963, which had advocated copyright concessions for developing countries including reductions in the duration of protection and the protection of folklore.1 At the time of the Stockholm Conference for the Revision of the Berne Convention, which was convened in June 1967, there were ten African states2 included in the 58 members of the Berne Union. The Stockholm Conference witnessed the first significant agitation from developing countries for an acknowledgement of their particular circumstances. In the preparations for the Stockholm Conference, it was proposed that the concerns of developing countries could be accommodated in a separate protocol. This question was the subject of some fairly acrimonious debates at Stockholm.3 The critical issues for developing countries were the definition of developing-country translation rights and compulsory licensing. The establishment of a protective regime for folklore was a burgeoning consideration. Although a Protocol was grudgingly adopted by the final plenary session of the Stockholm Conference, it did not come into force as it failed to secure the requisite number of ratifications. This Protocol became an Appendix to the Paris Act, which was adopted by the Paris Revision Conference of 1971. The current significance of the Berne Convention derives from the fact that its first 19 articles are incorporated into the TRIPS Agreement,...