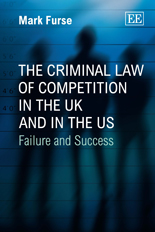 This invigorating work details the policy arguments behind the introduction of the law, and examines – through consideration of the successful prosecutions in the US – the extent to which the law in practice may be considered to have succeeded or failed in the UK. The role of the US as global antitrust policeman is also considered. The book concludes with a consideration of the difficulties facing the UK in choosing to pursue a criminal route within the current civil framework.

Chapter 4: Criminalisation in the UK: the Cartel Offence

In an express attempt to increase deterrence, the Cartel Offence (‘the Offence’) was introduced into the law of the UK with the enactment of the Enterprise Act 2002, which received Royal Assent on November 7, 2002. Whether the Offence should be considered as being part of the UK law of competition – although clearly it is–is itself, given the relationship between UK and the superior EU law of competition, problematic (as will be discussed below). This chapter discusses the introduction of the Offence, its terms, its relationship with EU competition law, the operation of the Offence to date, and the impetus for reform that found expression in the 2011 Consultation Document. At the time work began on this book, in March 2011, the OFT’s website indicated that three investigations into breaches of the Cartel Offence were ongoing: an investigation into commercial vehicle manufacturers; an investigation into the automotive sector; and an investigation into the agricultural sector. In the case of the first two investigations the OFT stated only that work was at an early stage, whereas in relation to a suspected cartel in the agricultural sector the OFT had executed a search warrant ‘at a business address in the West Midlands’. Two cases had been concluded, both of which are discussed in detail throughout this chapter. By November 2011 the OFT had closed its investigations in relation to the automotive and agricultural sectors without launching prosecutions; and by January 2012 the OFT’s website indicated that there were no open Cartel Offence investigations.