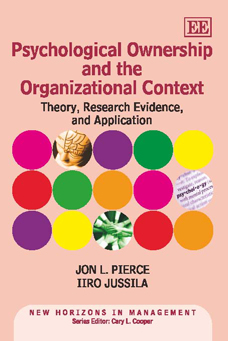 Psychological Ownership and the Organizational Context

Psychological ownership as a phenomenon and construct attracts an increasing number of scholars in a variety of fields. This volume presents a comprehensive and up-to-date review of the psychological ownership literature with particular attention paid to the theory, research evidence, and comments on managerial applications.

Chapter 9: The Sense of Ownership within the Work and Organizational Context: The Empirical Evidence

Empirical evidence has started to accumulate that enables us to offer an initial test of ‘psychological ownership theory’ by viewing some of its proposed antecedent and consequent conditions (see the hypothesized relationships presented in Chapters Six, Seven, and Eight). Our review of the empirical literature suggests that the most dominant approach to both the conceptualization and operationalization of psychological ownership at the individual-level has been influenced by the theoretical work of Pierce, Kostova, and Dirks (2001, 2003) and Van Dyne and Pierce’s (2004) operationalization of the construct. As we have noted in Chapter Two, and as will be discussed in Chapter Ten there are other approaches to both the conceptual and operational definitions given to the construct. Because the preponderance of the psychological ownership literature has followed the basic conceptualization of psychological ownership as employed throughout this book, and because it is extremely difficult (if not impossible) to blend literatures that attempt to employ constructs that are similar in name, yet differ in their conceptual and/or operational definitions, we have chosen to review here only that literature that has followed the approach to psychological ownership which is most dominant. ANTECEDENTS TO PSYCHOLOGICAL OWNERSHIP Etzioni (1991) noted that ownership is multidimensional in nature, appearing as a formal (legal) state and as a psychologically experienced phenomenon (that is, in the mind). As a part of their review of the literature focused on employee ownership as an organizational arrangement (for example, co-operatives, Employee Stock Ownership Plan (ESOP)), Pierce, Rubenfeld, and Morgan (1991) reasoned...