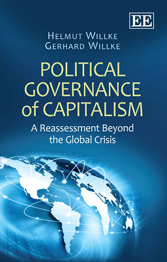 A Reassessment Beyond the Global Crisis

This path-breaking book highlights that systemic risks emerge from a globally operating financial industry that is not only disconnected from the real economy but also allowed to hide in ‘shadow banking’ practices. Governance based on national regimes fails to cover ‘finance-led’ global capitalism. The authors argue that the risk of systemic meltdown will reappear unless intelligent governance regimes are installed, combining legally binding rules and civil society pressures to restore the balance between risk-taking and accountability. They illustrate the goal is ‘resilient’ capitalism in which the rules of the game are set by politics and knowledge-based discourse.

During a long historic gestation period, many influences and preconditions had to coincide for capitalism to take off. Among many other factors, the conversion of passions into interests was one of the preconditions of setting capitalism on its path of triumph, as Albert Hirschman maintains (Hirschman 1977), and the displacement of Catholic insouciance by Calvinist Puritanism has been, as Max Weber says, a cornerstone of imbuing the economic system of capitalism with an intrinsic spirit beyond mere subsistence and utility. The dominance of the nation-state and an early coalition between awakening capitalism and fledgling democracy have been equally important contextual conditions for capitalism to become a global force. What happens when all or most of these preconditions are vanishing and are being superseded by alternate modes of arranging social affairs and constructing social systems? Nobody knows. But we must make educated guesses in order to anticipate what might be the next phases in the evolution of capitalism and democracy. In spite of a popular belief in a convergent global capitalism, actually varieties of capitalism have expanded. Instead of enforcing a common model, the global crisis has deepened the differences in regulatory approaches between the Anglo-American and the Continental European variants of political economy. However, these differences are miniscule in relation to the impact of the ‘third model’, which is China’s authoritarian capitalism. Weaknesses of the ‘Western’ model have become apparent in the struggle to prevent, manage and overcome the ongoing global financial and economic crisis, in the battle against huge...