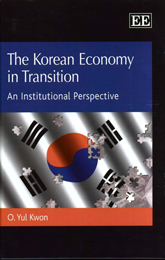 The Korean Economy in Transition

This informative book provides a comprehensive examination of the dynamics of institutional reform and the transition of the South Korean economy. The analysis, based on an institutional approach, stretches over three decades of remarkable economic success under a state-led system, through the 1997 financial crisis, to the current market-oriented system.

Chapter 3: The Korean Political System and its Effects on the Economy

3.1 INTRODUCTION The political system in Korea has transformed remarkably in the recent past: from an authoritarian system during the 1960s and 1970s, to democratization in the late 1980s, and further to a liberal-democratic political system. The system through which political decisions are made has an important bearing on the economy, as these decisions have direct impacts on the behaviours of all economic actors and entities. The purpose of this chapter is to assess the effects of Korea's political systems on its economic development since the establishment of the Republic of Korea (ROK) in 1948 with a focus on recent years. Theories of economic growth abound. Given the well-known theories on promoting economic growth, a burning question arises as to why certain countries are able to take advantage of these ideas to achieve economic growth, while others fail. In this regard, Olson (2000) argues convincingly that differences in per capita income across countries are due mainly to differences in the quality of institutions and economic policies. It is thus the government that plays a critical role in economic performance as it implements economic polices and establishes formal institutions. The nature of government is in tum reflected in the political system, which for this study refers to a system of political decision-making. Political decisions are made through the interactions among political stakeholders (such as politicians, political parties, bureaucrats, business, labour, interest groups and the general public) under a set of institutions such as legal, constitutional and party rules. Under such a...