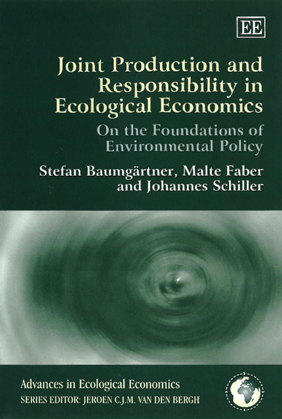 This groundbreaking book takes a fresh look at how environmental problems emerge from economic activity and how they may be addressed in a responsible and sustainable manner. At its centre is the concept of joint production. This captures the phenomenon whereby several effects necessarily emerge from one activity and whereby human action always entails unintended consequences. This, according to the authors, is the structural cause behind modern-day environmental problems.

Chapter 7: Joint Production and the Philosophy of Economics

Introduction 7.1 The development in the analysis of joint production, which has been described in detail in the previous chapter, is characteristic of a general development in economic theory (identiﬁed by Niehans 1990: 313– 315). The classical authors studied the phenomenon of joint production, and economic relationships in general, using concrete, empirically relevant examples. In the study of many diﬀerent empirical examples some general relationships became obvious, for example the so-called ‘rule of free goods’ (Smith 1976[1776]: 178). Later, the formulation of abstract models became more fashionable. Jevons’ (1911[1879]) breakthrough in the marginalist approach is entirely based on the study of a formal model. The same holds for Marshall’s analytical treatment in his Principles of Economics (1925[1890]) and even more so for von Neumann’s (1937, 1945/46) model of general equilibrium. Contributions to modern general equilibrium theory are even more abstract, so that it is hardly possible to directly link the assumptions employed to empirical facts about production. That is to say, the development in the analysis of joint production, just like the development in economic analysis in general, is characterised by an evolution from the study of empirical examples to the analysis of abstract models. In order to understand this development, in this chapter we make recourse to the philosophy of economics. In Section 7.2, we distinguish between two diﬀerent strategies for the enhancement of economic theory – the ‘problem-oriented’ strategy and the ‘theorem-oriented’ strategy. In Section 7.3, we argue that the current dominance of...