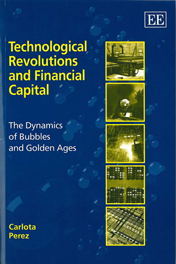 The Dynamics of Bubbles and Golden Ages

Technological Revolutions and Financial Capital presents a novel interpretation of the good and bad times in the economy, taking a long-term perspective and linking technology and finance in an original and convincing way.

Chapter 1: The Turbulent Ending of the Twentieth Century

3 1. The Turbulent Ending of the Twentieth Century On a day like any other in November 1971, a small event in Santa Clara California was about to change the history of the world. Bob Noyce and Gordon Moore launched Intel’s first microprocessor, the precursor of the computer on a chip. It was the big-bang of a new universe, that of all-pervasive computing and digital telecommunications. Chips were powerful, they were cheap and they opened innumerable technological and business possibilities. At that time not many people had heard of venture capital or ‘angels’. Though many common citizens in the USA had stocks and bonds, few followed the daily changes in the stock market. The word ‘derivative’ was generally confined to mathematics. Most middle-class people kept their money in the bank or in the savings and loan society and the self-made millionaires, although a core element of the American dream, were few and far between. In the decades to follow, all this was to change radically. Millionaires would abound and finance was to become the central concern of people with old and new wealth. By the end of the 1990s, even people with modest salaries had turned into hopeful ‘investors’. Henry Ford had been the central character in a similar event in 1908. The low-cost Model-T, with its internal combustion engine powered by cheap gasoline, was the big-bang opening the world of the automobile and of mass production and mass consumption. By the mid-1920s, the New York Stock Market was perceived...