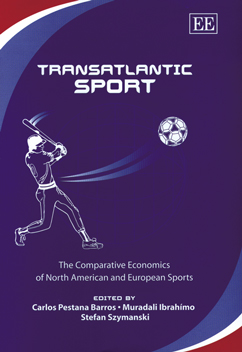 The Comparative Economics of North American and European Sports

This book offers a comparative perspective on the economics of sport and highlights both the similarities and differences in the North American and European models of sport. It tackles policy issues, such as the organising, financing and regulation of team sports alongside theoretical issues regarding income redistribution and competitive balance. It also evaluates the impact of sport and sports events on local communities and the wider economy providing a useful contrast of methods and results on the two continents.

Carlos Barros, Muradali Ibrahímo and Stefan Szymanski 1. THE TRANSATLANTIC DIVIDE Economics and sports are uneasy companions. Many people, including many of those involved in running and organising sporting competition, see little or no role for the application of economic logic to these activities. In this view, sport is something played and watched for the pleasure of it, often as a release from the daily economic grind. However, wherever large sums of money change hands, economics must creep in. In particular, the laws of economic competition must inevitably be addressed once the level of ﬁnancial interest rises above some minimum level. These laws take precedence over the rules of sporting competition, and an economic analysis of sporting rules and organisations from an antitrust perspective is inescapable. The minimum level that triggers antitrust involvement was reached ﬁrst in the United States, partly because the hurdle of economic signiﬁcance is lower and partly because the scale of sporting enterprise grew much faster in the US than elsewhere. Thus over the last century a coherent body of economic analysis of sport has developed dealing with the organisation of American sports. Outside of North America the economic dimension of sport has developed much more slowly. Before 1960 there were few cases heard, and it is only with the explosion in the value of broadcasting rights in the 1990s that concentrated antitrust scrutiny has been directed at sport in the European Union. Almost at once it became apparent that the lessons of the...