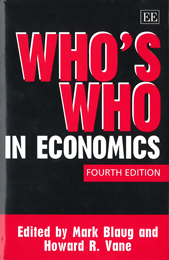 Who’s Who in Economics, Fourth Edition

This major reference work, now in its fourth edition, is an extensive and authoritative guide to the most frequently cited academic economists throughout the world. As with the previous editions, each of the entries is written by the entrants themselves and gives pertinent biographical data, principal fields of interest, chief publications and a statement of their principal contributions to economics as they – and not the editors – perceive them. This edition includes only living economists whose articles, published in the period 1990–2000, have been most frequently cited and as such it is the most up-to-date biographical dictionary of the leading players in the economics profession.