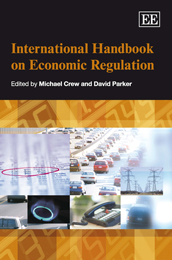 Edited by Michael A. Crew and David Parker

Michael Crew and David Parker have compiled a comprehensive, up-to-date and detailed analytical work on leading research issues in the economics of regulation. With contributions from international specialists in economic regulation, the Handbook provides a comprehensive discussion of major developments in both the theory and practice of regulatory economics. This book will be an indispensable source for both students and practitioners of regulation.

Paul Cook Introduction Defined as the transfer of productive assets from public to private ownership and control, privatization has continued to grow, particularly in developing and transitional economies. A significant proportion of privatization transactions in the developing economies have entailed sales of public utilities. This chapter will concentrate on regulation and competition in developing countries though many of the arguments apply equally to the transition economies of Central and Eastern Europe and to some developed economies. In general, private participation in economic infrastructure in developing countries has been concentrated in the telecommunications and the electricity sectors. According to the World Bank (2003), between 1990 and 2001 privatization accounted for 41 per cent of total private participation in infrastructure projects in developing countries. The percentage share for cumulative investment in infrastructure with private participation over the same period was 44 per cent for telecommunications and 28 per cent for electricity. The water, gas and transport sectors accounted for a smaller share (World Bank, 2003). Privatization was central to the expenditure reducing and resource switching policies of structural adjustment introduced by the World Bank and the IMF in the early 1980s and pursued vigorously up to the mid-1990s (Cook, 1988; Cook and Kirkpatrick, 1995). The reduction in government expenditure achieved through privatization was viewed as a policy that would improve productive efficiency in the public and private sectors. Liberalization that accompanied privatization was meant to ensure that relative price signals worked and would promote welfare-enhancing resource allocation (Cook, 1997). In practice, policy-makers...