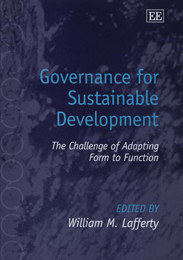 The Challenge of Adapting Form to Function

* Susana Aguilar Fernández INTRODUCTION Contemporary Spanish environmental policy, its shortcomings notwithstanding, owes its existence mainly to membership in the European Union. In Spain, economic recovery started comparatively late (around the 1960s) while social welfare lagged behind Western Europe until approximately a decade ago.1 Inferior material status helps explain why authorities and citizens alike have traditionally been concerned with matters other than environmental protection, and why governments, first on the left (1982–96) and later on the right (1996–2004), have tended, in a fairly unsophisticated way, to equate the economic growth needed to reduce the gap in relation to Western Europe with acceptable levels of environmental pollution. Consequently, when Spain joined the EU in 1986 its environmental profile was low. Some official reports even acknowledged that if the country had not entered the EU, a genuinely endogenous environmental policy would have taken much longer to take off (DGMA 1987). To illustrate, the 1972 Air Protection Law (the only relatively important piece of environmental legislation prior to EU accession) had been systematically breached by industries and its enforcement neglected by the authorities. The low profile of the environment is still reflected in the second-rank importance of conservation-related issues in Spanish politics, and in the weakness of the green movement at the national level.2 Thus, until relatively recently Spain has been an environmental laggard, following a wait-and-see approach in relation to EU legislation. Significant change did not take place until the run up to the Maastricht Treaty, when the discussions focused...