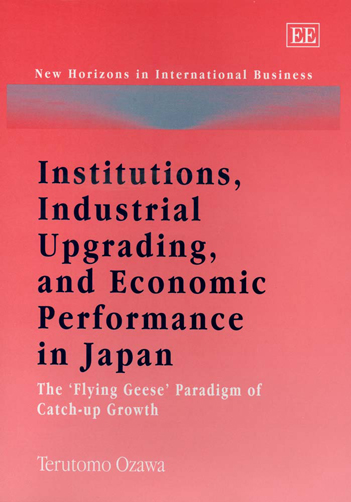 Terutomo Ozawa examines Japan’s once celebrated post-war economic success from a new perspective. He applies a ‘flying geese’ model of industrial upgrading in a country that is still catching-up, to explore the rise, fall and rebound of Japanese industry with its evolving institutions and policies.

4.1. COMPONENTS-INTENSIVE, ASSEMBLY-BASED INDUSTRIES The components-intensive, assembly-based industries that manufacture highincome-elastic consumer durables, notably automobiles and consumer electronics, soon came to replace the heavy and chemical industries as Japan’s leading growth sector from the mid-1970s onward (i.e., shortly after the first oil crisis of 1974). Japan’s success in building higher value-added, highquality, and energy-efficient goods in the assembly-based industries has been spectacular by any standards ever since. Throughout the industrial world, automobiles and electronics have grown very rapidly after WWII, but the growth of these industries was particularly pronounced in Japan during the 1970s and 1980s. The growth index of the electric/electronics goods industry over the period 1970–82, with 1970 as the base year (100), for example, reached 292 in Japan, compared to 156 in the US and 139 in West Germany. The transport equipment industry (automobiles and ships) was the second fastest growth sector in both Japan and West Germany, but its output rose much faster in Japan (177) than in the latter (127). In contrast, the US experienced rather slow growth (112). General machinery (such as motors and machine tools) was another industry that experienced a rapid expansion in both Japan and the US, but again Japan’s general machinery industry grew at a faster pace (151) than that of the US (145) (MITI, 1986). This reflected in part the fact that Japan was a latecomer, catching up to the West in these higher value-added industries – and in part Japan’s own technological contributions. Furthermore, these three groups of...