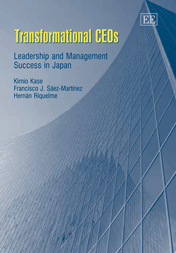 Leadership and Management Success in Japan

Transformational CEOs questions why some Japanese firms succeeded in the 1990s despite an economy that failed – regardless of the burst of the ‘bubble’ economy, a number of Japanese companies have maintained or extended their international leadership in particular sectors. The authors argue that whilst some of the reasons for successes are plain common sense – operational effectiveness and superior CEO leadership – some are Japan-specific and point to a break with traditional leadership rationale.

A4. Shin-Etsu Chemicals’ Chihiro Kanagawa In his autobiography, Jack Welch (2001) the former CEO of GE, cited ShinEtsu Chemicals’ Chihiro Kanagawa as one of the excellent top managers in Japan who was courageous enough to push forward their company’s continual renewal.1 Welch’s praise was borne out by Kanagawa’s remarkable performance as Shin-Etsu’s president. Over his 12-year presidency the market capitalization of his firm reached ¥1598 billion in October 2002, up ¥1142 billion from August 1990.2 Shin-Etsu Chemicals’ profit was 9.16 per cent of sales in 2001 and its ratio of net worth to total capital reached 63.03 per cent. (Niihara, 2002). This is an outstanding feat of managerial creativity in a commodity-based low-technology industry such as the chemical industry. Traditionally Japan had not been able to compete with the giants, namely Dupont, Dow Chemical, BASF, and Bayer. With 16456 employees (consolidated base) in 2002 ShinEtsu was on par with these competitors where market capitalization was concerned. This case focuses on Chihiro Kanagawa, the wonder worker in an industry where Japan had been unable to produce a world-class competitor, who continued to achieve record performance during the Japanese recession of the 1990s and 2000s.3 His management ‘philosophy’ will be set out below. CHILDHOOD AND SCHOOL DAYS Kanagawa was born in 1926 in Korea where his father served as a judge. He was brought up there until he moved to Okayama, Japan, to enter the Sixth High School. Okayama was destroyed by a US air attack on 29 June 1945. He and...