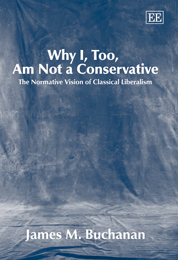 Why I, Too, Am Not a Conservative

The Normative Vision of Classical Liberalism

* INTRODUCTION In Chapter 2, I tried to identify the several behavioral attributes that must characterize the citizenry of a polity, or at least a substantial proportion thereof, in order for a classical liberal order to emerge and to remain viable. And I defined the liberal order loosely by political organization in the form of constitutional democracy and economic organization through operative market arrangements, relatively free of hands-on political direction. I concentrated attention on four separate attributes: individual autonomy, mutuality or reciprocity of interpersonal respect, minimal understanding and, finally, willingness to defend the order against its potential enemies. In this chapter, I want to extend some of the arguments in Chapter 2 by examining more closely the evaluative or normative attitudes, or sets of attitudes, toward the empirical realities that describe personal behavior, as opposed to those realities, as such, and especially as these might be revealed by modern ‘science.’ I suggest that the liberal democratic order also depends critically on a requisite set of normative presuppositions about the attributes of participants in that order – presuppositions that must be imposed as the ‘hard core,’ as it were, in any discussions of reform in the institutional structures of existing societies. At least indirectly, I shall be revisiting the centuries-long and continuing debate, which I refer to as that between Plato and Adam Smith, concerning the potential natural equality or inequality among human beings along dimensions that may be relevant for social and political organization. As noted, however, my emphasis is on...