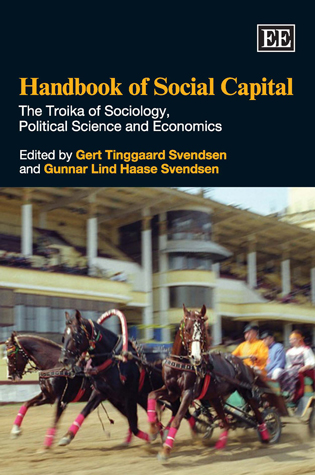 The Troika of Sociology, Political Science and Economics

The Handbook of Social Capital offers an important contribution to the study of bonding and bridging social capital networks, balancing the ‘troika’ of sociology, political science and economics. Eminent contributors, including Nobel Prize winner Elinor Ostrom, explore the different scientific approaches required if international research is to embrace both the bright and the more shadowy aspects of social capital. The Handbook stresses the importance of trust for economies all over the world and contains a strong advocacy for cross-disciplinary work within the social sciences.

Christian Bjørnskov* 20.1 Introduction In the early 1970s, the later Nobel laureate Kenneth Arrow (1972: 357) remarked that ‘virtually every commercial transaction has within itself an element of trust’ and went on to suggest that ‘much of the economic backwardness in the world can be explained by the lack of mutual conﬁdence’. Arrow had no way of knowing how right he may have been in his assessment as there were almost no data on trust in those days, and the few that were available were not to be used by economists for the next two decades. That situation changed when the concept of ‘social capital’ burst onto the scene of the social sciences following Robert Putnam’s (1993) book, Making Democracy Work. Putnam (1993: 167) deﬁned social capital as ‘features of social organization, such as trust, norms, and networks, that can improve the eﬃciency of society by facilitating coordinated actions’ and argued that it was the key to understanding the vast and somewhat mysterious diﬀerences between Northern and Southern Italy in wealth and the quality of governance. The ensuing popular and academic attention gained by the book was more than substantial. Since then, the concept of social capital has proven to be more than a mere fad even if Putnam’s speciﬁc view of it as a unitary concept has been discredited (cf. Claibourn and Martin, 2000; Uslaner, 2002; Bjørnskov, 2006a). It has, for example, been demonstrated that features under the umbrella of social capital...