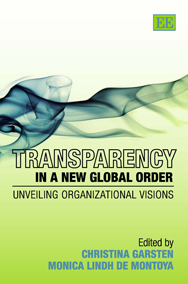 Transparency in a New Global Order

This book argues that transparency is a concept that has gained increasing currency and favour as an organizing principle and administrative goal in recent years. Calls for transparency have been directed towards states, markets, corporations and national political processes as well as towards large institutions such as the European Union.

Simone Abram INTRODUCTION: ELEMENTS IN THE SEARCH FOR DEMOCRATIC LEGITIMACY In a basic sense, modern representative democracies derive legitimacy from electoral participation. Governments gain authority from their election by popular vote which provides a mandate. However, electoral turnout has declined dramatically in many Western European countries. In some cases this decline has reached a dramatic pass. While in the 2005 UK national elections, overall turnout was 61.3 per cent,1 in local elections turnout has in some cases dropped under 10 per cent, and in 1998 overall turnout was just 28.8 per cent.2 Given these conditions, maintaining the legitimacy of routine political representation becomes problematic. Even at the best of times, representative systems can be criticized for the unaccountability of politicians between their election and re-election a number of years later. The response of the New Labour central government in the UK from their election in 1997 was to promote direct participation of citizens in local government, and various kinds of public–private partnership. They argued that greater civic involvement in political processes would bring government ‘closer to the people’ (DETR, 1998a), and make local government more accountable. As political slogans, ‘Participation’ and ‘Transparency’ proved popular, but in practice it has become clear that in few cases did the government set out any detailed plans for what this might entail, nor was there any explicit or ideological model for practice. As Fairclough argues, the government voiced some positive-sounding policies, and waited to see how they would be implemented (Fairclough, 2000)...