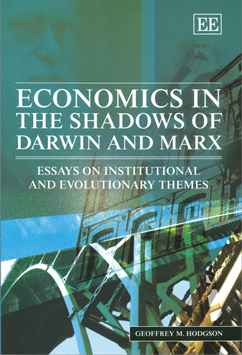 Economics in the Shadows of Darwin and Marx

Essays on Institutional and Evolutionary Themes

Economics in the Shadows of Darwin and Marx examines the legacies of these two giants of thought for the social sciences in the twenty-first century.

The resulting impression is one of pulling global salvation out of the critical realist hat. Andrew Sayer, ‘Critical Realism and the Limits to Critical Social Science’ (1997). 5.1 INTRODUCTION Critical realism has established a substantial following, leading to the formation of the International Association for Critical Realism in 1997 and the subsequent launch of its Journal of Critical Realism in 2002.1 In particular, the works of Roy Bhaskar have attracted widespread interest, his ideas being adopted by leading social scientists, including Margaret Archer, Andrew Collier and Tony Lawson. To some degree, this reputation and following is deserved. Critical realism addresses some core issues in the philosophy of science and carries some important insights concerning the nature of scientific endeavour.2 Critical realism also makes persistent claims concerning its practical applicability and policy implications, which are often portrayed as radically socialist in character.3 This chapter scrutinizes three of the more prominent of these political claims: that critical realism (A) is emancipatory, (B) shows that 1 A version of this chapter first appeared as Hodgson (1999c). Since then I have come across Sayer (1997), which similarly argues that attempts to derive normative conclusions on the basis of explanatory critiques of social phenomena are flawed. Nielsen (2002) notes a tension between the highly politicized version of critical realism promoted by Bhaskar and the contrasting accounts of others such as Lawson and Fleetwood. 2 The modern ‘critical realism’ of Bhaskar, Archer, Lawson, Collier and others should not be confused with the earlier tradition in American...