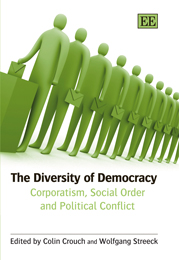 The Diversity of Democracy

Revisiting the now classical literature on neo-corporatism in light of current research and theory, the contributors illustrate the enormous influence of the ‘neo-corporatist debate’ on modern political science, political sociology, and political economy. Reflecting on a major part of the recent history of social science, they shed light on some of its current core concepts, such as governance, policy networks, and varieties of capitalism. The book traces the evolution of political conflicts concerning social order; from the class conflicts in Europe in the of 1970s Europe to the subsequent Latin American and Eastern European battles over democratization and democratic transition, to the debate on the ‘democratic deficit’ of the European Union.

Chapter 7: The Problem of Legitimacy in the European Polity: Is Democratization the Answer?