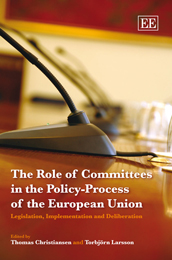 This book provides a comprehensive account of the role of the advisory, legislative and implementation committees involved in the policy-making process of the European Union. This is an aspect of EU politics that is often overlooked and remains under-researched, even though such committees can have wide-ranging influence in the policy-process.

Chapter 3: Forms of Informal Governance: Searching for Efficiency and Democracy

B. Guy Peters INTRODUCTION A number of academic observers of the changing nature of governing have argued that there has been a shift from ‘government to governance’ (see most notably Rhodes, 1997), in which formal institutions of government are less capable of actually making authoritative decisions than in the past. Less extreme versions of this argument have pointed to the growing importance of non-governmental actors in providing direction to society and the economy. For example, the phrase ‘governing at a distance’ has been used to describe the indirect forms of governance in the Netherlands and similar political systems (Kickert et al., 1997; Kooppenjan and Klijn, 2004), and ‘network governance’ and ‘democratic network governance’ have been applied to patterns of governing in Denmark and elsewhere (Torﬁng and Sorenson, 2002; Milward and Provan, 2000). Approaching the same general phenomenon from a different analytic direction, Lester Salamon (2001) has described the instruments of ‘new governance’, indicating a shift from using command and control instruments such as regulation to using more collaborative instruments such as partnerships and framework legislation. All these mechanisms described above, and many more, could be described as ‘informal governance’. That is, these mechanisms all involve governing through mechanisms that depend to some extent upon the cooperation of the non-governmental actors involved. To some extent governments have been engaged in informal governance for most of their existence, using, for example, interest groups as means of delivering public services in areas such as agriculture and professional licensure. Central governments have also...