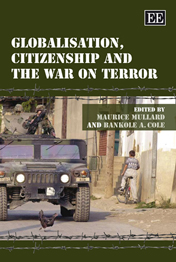 Globalisation, Citizenship and the War on Terror

Edited by Maurice Mullard and Bankole A. Cole

This book explores globalisation and the war on terror in a world that is becoming increasingly and significantly polarised and in which dialogue is undermined. The authors contend that citizenship does not obey a static definition, and that its meaning is located in changing economic, social and political contexts. Equally, civil, political and social rights are continually being politically defined. The war on terror has, the book argues, influenced issues of civil liberties and prioritised the need for ‘security’ over and above the protection of human rights: it has redefined the meaning of the rule of law.

Chapter 10: Globalisation, Terror and the Future of ‘Development’: Citizenship Beyond Bare Life?

Su-ming Khoo This is the story of a crime – of the murder of reality. And the extermination of an illusion – the vital illusion, the radical illusion of the world. Jean Baudrillard, The Perfect Crime (1996) INTRODUCTION: THE VITAL ILLUSION OF DEVELOPMENT ‘Development’ has provided a central theme and organising concept for modern social and political thought. Although it is conventionally seen as a post-1945 concept, ideas of development are grounded in much earlier Enlightenment understandings of historical change as universal and progressive, a rolling-out or unfolding of human emancipation and freedom. The project of development is thus intimately bound up with understandings of citizenship and democracy – the ‘social contract’, and with the claims of the politically, socially and economically excluded. The idea of development is partly what Marshall Berman (1982) calls the ‘vital mode of experience’ of modernity itself and, like modernity, it has both utopian and dystopian faces. Positivist traditions have shaped ‘development’ as a schema for thinking about people, nature and economy since French and English Enlightenment thinkers sought to discover, explain and prescribe universal principles for economic and political government. Universalising concepts of human progress emerged at the historical juncture when the capitalist world economy was expanding. Nation states consolidated their sovereignty and sought to manage economic, social and industrial transformation through territorial expansion and the intensiﬁed exploitation of nature and humans. As national economies pulled together, they formed part of an emerging international system of modern states (Wallerstein, 2004). Vast areas and peoples were integrated...