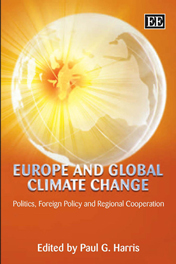 The core objective of this book is to better understand the role of foreign policy – the crossovers and interactions between domestic and international politics and policies – in efforts to preserve the environment and natural resources. Underlying this objective is the belief that it is not enough to analyze domestic or international political actors, institutions and processes by themselves. We need to understand the interactions among them, something that explicit thought about foreign policy can help us do.

* Andreas Tjernshaugen and Ho-Ching Lee INTRODUCTION Since the late 1980s, environmental NGOs (ENGOs) have sought to make governments in Europe and the rest of the industrialized world commit to and implement substantial and early reductions in greenhouse gas (GHG) emissions. One of several political arenas where they have worked to promote this goal is during international negotiations of the United Nations (UN) Framework Convention on Climate Change (FCCC). The aim of this chapter is to throw light on the strategies ENGOs employ in seeking to inﬂuence international negotiations and foreign policy on global climate change (GCC). To illustrate the discussion, we speciﬁcally examine how ENGOs attempted to inﬂuence Norway in the FCCC negotiations from 1995 to 2001. We look at the activities of Norwegian ENGOs as well as their international counterparts in an international ENGO coalition, the Climate Action Network (CAN), during the main negotiating sessions. Not surprisingly, Norway’s behavior was the main concern for the Norwegian groups, while multinational ENGOs such as Greenpeace International or WWF International gave attention to Norway more sporadically. Our focus on strategy choice says little by itself about the environmental groups’ actual results in terms of inﬂuence over outcomes (Betsill and Corell 2001). The NGOs’ strategies could simply be a failure, and their actions irrelevant to outcomes. However, careful attention to the strategies actually chosen may help us to identify potentially important forms and channels of inﬂuence. Speciﬁcally, we point out that even when attending the UN conferences,...