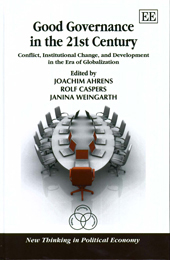 Good Governance in the 21st Century

Conflict, Institutional Change, and Development in the Era of Globalization

This book explores the interdependences of economic globalisation, political tensions, and national policymaking whilst analysing opportunities for governance reform at both national and international levels. It considers how governance mechanisms can be fashioned in order to both exploit the opportunities of globalization and cope with the numerous potential conflicts and risks.

Chapter 10: On the African Development Tragedy

Jorn Altmann The World Bank's former president Paul Wolfowitz made his first official trip abroad to Africa, and he announced that Africa would be a focal point of his term in the World Bank (Backfisch 2005). The British Government had formally established a Commission for Africa at the beginning of2004. This is an impressive fact since there are few examples of similar initiatives - dealing with the development of a specific region of the world - on a government level. The 15th World Economic Forum in Capetown also prepared for the G8 summit in Gleneagles in Scotland where Great Britain presented a kind of 'Marshall Plan for Africa'. 1. SOME FACTS In many statistics Africa occupies leading positions when it comes to issues such as wars, violence, famine, infant mortality, repression, corruption, or aids. When the topic is development, Africa usually ranges last. Among the 20 least developed countries in terms of income per head, 18 are African (the other two being Nepal and Tajikistan (World Bank 2004)). The UNDP has a different list where out of the 34 least developed countries 30 are in Black Africa, and the last 25 of that list are all African (UNDP 2005). Across the continent 38 million people face famine. In Africa 340 million people - or half the population -live on less than $1 a day (Welthungerhilfe 2005). It is the continent with 12 per cent of the world's population but with 80 per cent of the world's Aids deaths. Unemployment varies...