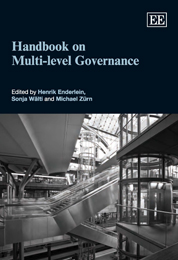 Scholarship of multi-level governance has developed into one of the most innovative themes of research in political science and public policy. This accessible Handbook presents a thorough review of the wide-ranging literature, encompassing various theoretical and conceptual approaches to multi-level governance and their application to policy-making in domestic, regional and global contexts.

Miranda A. Schreurs 20.1 INTRODUCTION In comparison with the politics of accommodation and cooperation that took root among Europe’s largest economies – France, Germany and Great Britain – in the decades following World War II, unresolved territorial questions and ideological differences between Russia and China, China and Japan, and Russia and Japan left relations among Asia’s largest economies cold and tense. Fostering interdependence in this political climate proved difficult. At a time when Europe’s experiment with economic integration, first through the European Coal and Steel Community (1951) and then with the Treaty of Rome (1957), was proving a successful means of promoting peace and economic prosperity, the states of East and Southeast Asia were stuck in a politics of distrust. Regional cooperation in Southeast Asia has been strongly influenced by the region’s history.1 Independence was slow to come to many Southeast Asian states. Once independence was gained, it was often followed by bloody internal strife among different ethnic groups and ideological supporters. Dictators and military generals ruled throughout much of the region. Cold War politics came into full play in East and Southeast Asia and divided countries along ideological lines. The struggle between communism and capitalism fed into bloody civil wars that led to the divisions of China and Taiwan and North and South Korea. It drew the USA deeper and deeper into the security politics of Southeast Asia, including in Vietnam. The war in Vietnam spilled over into neighboring Laos and Cambodia, where Pol Pot pursued a genocide campaign that led...