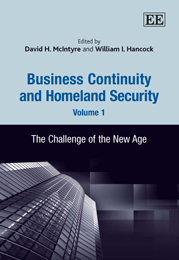 The Challenge of the New Age

Edited by David H. McIntyre and William I. Hancock

A practical and timely study on how businesses need to prepare for natural and man-made disasters. What should businesses consider in preparing for terrorist attacks, natural disasters, pandemic illnesses and other emergencies? What steps can a business take to ensure continuity during and after a crisis? What can we learn from past success?

Chapter 9: The Impact of Disease and Pandemics on Business Continuity

Elin Gursky* Medicine is the only profession that labors incessantly to destroy the reason for its existence. (James Bryce, British Politician, 1838–1922) There are no such things as incurables; there are only things for which man has not found a cure. (Bernard M. Baruch, American Economist, 1870–1965) INTRODUCTION The possibility now exists of a pandemic, acts of deliberate terrorism with biological, chemical or radiological agents, or some other type of catastrophic event that can cause mass illness and fatality. The potential for such a scenario to trigger a serious and sustained negative impact to the global economy is irrefutable. Although seasonal spikes in disease and absenteeism are a routine concern, the business community should now vigorously reassess its personnel health policies and institute plans that protect both its workforce and its continuity of operations in the face of an atypical and large-scale event. THE INTERSECTION OF DISEASE AND SECURITY The history of mankind mirrors the receding and surging of major disease outbreaks. Influenza pandemics, plagues, smallpox, polio and tuberculosis are but a few examples of communicable diseases that have decimated populations, inflicted a host of debilitating symptoms such as blindness and paralysis, caused high premature death rates and contributed to unstable economies and governments.1 Plague entered Europe via the trade routes from Asia during the late Middle Ages. Its annihilation of over one-quarter of the population caused labor shortages and economic decline and depressed progress and social reform for much of the fourteenth century.2 The pre-Columbian civilizations of...