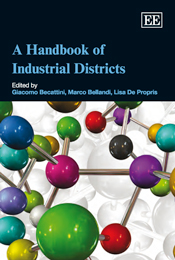 Gioacchino Garofoli 1. The presence of IDs in Europe The emergence of industrial districts (IDs) in Italy in the second part of the 1970s and the rediscovery (Becattini 1979) of the alternative industrial organisation model introduced by Alfred Marshall in the late 19th century obliged scholars to reflect on the presence of this model of production organisations in other European countries. Even in an historical perspective, IDs were important in the second part of the 19th century and the beginning of the 20th not only in Great Britain but even (if not especially) in the second comers (see the French and German cases). The progressive disappearance of the ID model in northern European countries in the period between 1920–30 and 1950–60 was linked to the extension of the model of large Fordist firms (Sabel and Zeitlin 1982; Piore and Sabel 1984; Zeitlin 1985); whereas the presence of small-scale production survived in peripheral areas. At the beginning of the publication of ID literature in the late 1970s and beginning of the 1980s, the enthusiasm which moved some Italian scholars in organising field research, visiting firms and discussing with social actors and local public bodies looking for information and evidences, analysing economic informal data and inter-firm links to understand the working mechanism of the industrial production model based on a high density of small firms and flourishing entrepreneurship was regarded as strange by northern European scholars. At the same time Italian scholars looked ahead and outside Italy to understand if...