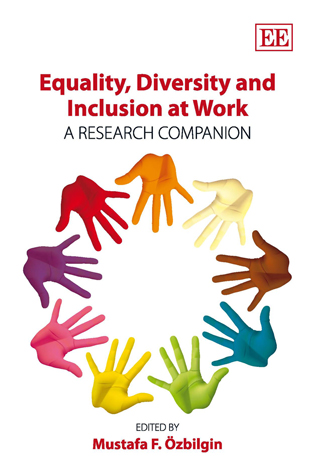 Equality, Diversity and Inclusion at Work

With over thirty chapters, this book offers a truly interdisciplinary collection of original contributions that are likely to influence theorization in the field of equality, diversity and inclusion at work.

Miri Lerner, Ayala Malach Pines and Dafna Schwartz INTRODUCTION Women constitute one of the groups most susceptible to poverty (Pearce, 1990). Owning a business is one way for women, as well as other marginalized groups, to climb out of poverty (Izyumov and Razumnova, 2000). Through starting a small business, women can not only improve economically and socially, but also actualize themselves and improve their psychological well-being (Crossby, 1991; Barnett and Hyde, 2000). Self-employment is especially important for women who have difficulty finding employment because of limitations imposed by education, age, social marginality or language. In many countries in recent years, there has been a growing recognition of the economic potential in women’s entrepreneurship, and as a result, the relative weight of women among business owners has grown (Acs et al., 2004; Moore, 2004). The establishment of independent businesses has been shown to increase the rate of development of the national economy in countries that were smart enough to encourage it (Minniti et al., 2004). In India, women entrepreneurs have been described as a ray of hope for economic development (Canesan et al., 2002). Nevertheless, the growth in the number and influence of women entrepreneurs is only at its early stages and the potential of this economic channel is enormous. In the extensive literature on entrepreneurs (for example, Cooper and Gimeno 1992; Kets de Vries, 1996; Brandstaetter, 1997; Miner, 1997, 2000; Nicholson, 1998; Zimmerer and Scarborough, 2001) it is only in recent years that a growing number of studies have started...