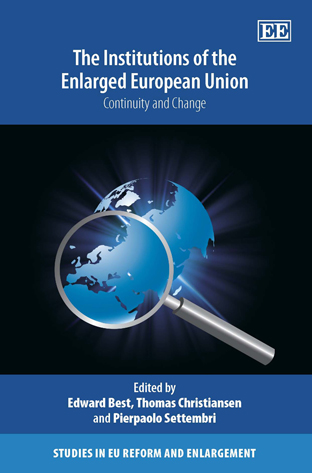 Chapter 2: The European Council: A Bigger Club, a Similar Role?

Wolfgang Wessels It seems not inappropriate to start any assessment of the institutional impact of enlargement at the top, by looking at the European Council, the body bringing together the heads of state or government of the member states with the President of the European Commission at the political apex of the European Union. No other body has shaped the fundamental developments of the European construction as profoundly as this institutionalized summitry (cf. de Schoutheete 2006, p. 57; Hayes-Renshaw and Wallace 2006, p. 173). Not an organ of the European Community, this elite ‘club’ has its legal basis in the Treaty on European Union. According to the treaty formulation, ‘the European Council shall provide the European Union with the necessary impetus for its development and shall deﬁne the general political guidelines thereof’ (Art. 4 TEU). This general and ambiguous description, however, fails to fully recognize the body’s political relevance in constructing and running the EU system. It has been called a ‘provisional government’ (‘gouvernement provisoire’) (Monnet 1976, p. 598), a ‘joint decision centre’ (Tindemans 1975), ‘constitutional architect’ (Wessels 2005b, p. 55), a ‘system of collective leadership’ (Ludlow 2005, p. 3) and the ‘high guardian’ (‘haute tutelle’) (Louis and Ronse 2005, p. 57). It has also been described as not an ‘institution’, but a ‘locus of power’ (de Schoutheete 2006, p. 45). The formulations of its role in the Constitutional Treaty and the subsequent Lisbon Treaty have underlined in several ways the rise in importance of the European Council. This...