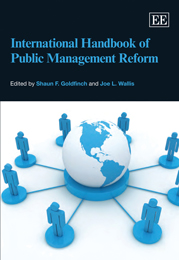 Shaun F. Goldfinch1 New Zealand is a small, unitary, constitutional monarchy in the South Pacific, with a Westminster system of government and a single house of Parliament. Like the UK, it lacks a single written constitution, which is instead set out in a series of statutes, common law, rules, regulations and conventions. In the case of the public sector, much of its management structures and machinery can be found in recent amendments to statute, which codified and somewhat modified much of the legislation-driven new public management (NPM) reforms of the 1980s and 1990s, to which I will refer in this chapter. The Executive Council is composed of ministers and associate ministers – who must be members of Parliament – who hold particular areas of responsibility; in some cases several. The Cabinet – a subset of these ministers, headed by the Prime Minister2 – is the power house of government. The introduction of proportional representation from the 1996 election has made coalition and/or minority governments the usual state of affairs. Departments are headed by chief executives who report to the minister(s) responsible. In turn, conventions of ministerial responsibility hold that ministers are responsible to Parliament and the people for the actions and omissions of their departments, as well as their own actions; although this is sometimes honoured more in the breach. A distinction is made between the ‘public service’, the ‘state sector’ and the ‘public sector’. The first consists of 35 public service departments. There are four ‘non-public service’ departments in the executive branch:...