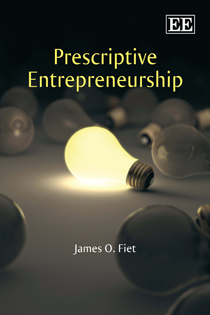 In the only known programme of prescriptive entrepreneurship, James Fiet provides a marked contrast to the standard descriptive focus of entrepreneurship studies. Instead of the anecdotally based pedagogies that have dominated the teaching of entrepreneurship (and which do not control for luck-based success), the author lays out a programme of research to develop and test theoretically derived guidelines for how to improve the success rate and performance of aspiring entrepreneurs. Rather than describing what entrepreneurs do, he prescribes and tests what they ought to do.

Key Ideas The most unusual aspect of the ideas presented in my approach to prescriptive entrepreneurship is that they have been experimentally tested against the most accepted approach to discovering ideas, which is entrepreneurial alertness. They also represent the ﬁrst known application of experimental economics in the ﬁeld of entrepreneurship research. This chapter reports on three diﬀerent two-sample, post-test experiments, each of which used subjects from diﬀerent populations. The populations were MBA students, the working poor and technically trained employees. The same treatment was administered to 105 subjects from these three populations who generated 354 venture ideas, which we evaluated using the framework discussed in Chapter 4. I found that the treatment based on theory from informational economics improved the discovery of ideas with the potential to create new wealth by a minimum of nine times to one compared with alertness. In Appendix 5.1 (at the end of the book), I provide complete documentation on the treatment and how it was administered to the randomly assigned subjects. THE EXPERIMENTAL BACKGROUND OF PRESCRIPTIVE ENTREPRENEURSHIP Despite the neglect of most entrepreneurship researchers (Demsetz, 1983), for more than 60 years there has been an on-going conversation among economists who have examined the relationship between entrepreneurs and information. This conversation is important because it provides clues about how to ﬁnd discoveries. The clues, however, are only indirect inferences because economists have rarely if ever included discovery; especially under equilibrium conditions, even though the study of other economic behaviors has become increasingly important....