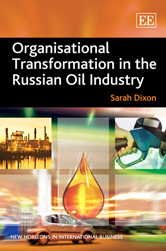 Four longitudinal case studies of Russian oil companies are drawn upon to explain the process of organisational transformation. The book highlights how and why this process differs between companies within the same industry, explores the complexity of the change process and discusses the importance of the top management team. The links between organisational learning, dynamic capabilities and the implementation of change are analysed. An interesting insight into the constraints and enablers of organisational change is also provided. The framework developed from this study can be successfully applied to other organisations wishing to bring about organisational change.

By 2007 the Russian oil landscape had changed radically from the situation described in Chapter 2. By May 2007, the last Yukos asset had been transferred to the state, transforming Rosneft, the state-controlled oil company, from Russia’s number 8 oil producer, worth $6 billion, to the country’s largest producer with a market capitalisation of $90 billion. The acquisition of Sibneft, one of the ﬁve integrated oil majors, by Gazprom, the state gas company, had also propelled Gazprom into the oil business. By January 2007, Gazprom was number 2 behind ExxonMobil in terms of market capitalisation rankings for energy companies and Rosneft had appeared in the rankings at number 13. Lukoil and Surgutneftegaz were at 16 and 17 respectively (PFC Energy, 2007). Both Rosneft and Gazprom are heavily inﬂuenced by President Putin. Rosneft is chaired by Igor Sechin, Putin’s deputy chief of staﬀ and one of the Kremlin insiders. Gazprom is chaired by Dmitry Medvedev, ﬁrst deputy prime minister and one of Putin’s colleagues from St Petersburg. TNK-BP has also not escaped the growing inﬂuence of the state – it was obliged to sell its majority stake in the Kovytka gas ﬁeld to Gazprom, because it had failed to meet the production quotas stipulated by the licence. However, it had been unable to meet production quotas because of Gazprom’s refusal to develop an export pipeline. In the meantime, although Russian oil production has continued to rise (Figure PS.1), growth rates have declined (Figure PS.2). Output growth for the industry was...