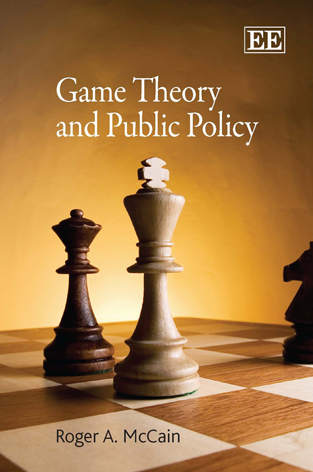 Game theory is useful in understanding collective human activity as the outcome of interactive decisions. In recent years it has become a more prominent aspect of research and applications in public policy disciplines such as economics, philosophy, management and political science, and in work within public policy itself. Here Roger McCain makes use of the analytical tools of game theory with the pragmatic purpose of identifying problems and exploring potential solutions in public policy.

The 2007 Nobel Memorial Prize in Economics was awarded just at the time this chapter was being drafted, and was awarded to Hurwicz, Maskin, and Myerson for their contributions to social mechanism design. Maskin and Myerson are well known as game theorists, and the scientific background document for the prize (Royal Swedish Academy of Sciences, 2007, p. 1) states “By using game theory, mechanism design can go beyond the classical approach,” so arguably this is the third Nobel for game theory. “Mechanism design, Professor Maskin explained, can be thought of as the ‘reverse engineering part of economics.’ The starting point, he said, is an outcome that is being sought, like a cleaner environment, a more equitable distribution of income or more technical innovation. Then, he added, one works to design a system that aligns private incentives with public goals” (Lohr, 2007). Much of the work of social mechanism design has been within the scope of game theory, though (like bargaining theory) social mechanism design has a longer history than game theory does. Hurwicz (1973, p. 21) traces the idea to utopian socialism. Hurwicz’s founding lecture was concerned (in its first three sections) with dynamics and with the exchange of information necessary to achieve efficiency or other objectives by particular mechanisms, supposing that people report honestly. Some mechanisms will require more or bigger (thus more costly) messages to attain efficiency, or even feasibility. The feasibility of central economic planning (at that time allegedly practiced in the Soviet Union) was a major...