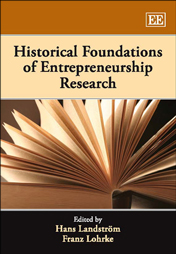 This book historicizes entrepreneurship research, its primary thesis being ‘history matters’. Expert contributors discuss the field’s long history and explore whether it has developed a mature and comprehensive knowledge base. The intellectual roots of several important theories are then examined in depth because, as entrepreneurship research has become more theory driven, and scholars have borrowed theories from many different fields, it becomes increasingly important to understand their origin. Finally, the book demonstrates how economic history research (for example, the historical and institutional context of entrepreneurial behaviour) can contribute to our understanding of entrepreneurship.

David Ahlstrom and Linda C. Wang INTRODUCTION The rise of East Asian economies from Japan to China and Southeast Asia has motivated much study of how these economies grew so quickly and inspired a model for economies in the developing world (Berger and Hsiao, 1988; Fallows, 1995; Johnson, 1982; Rowher, 1995; Vogel, 1979). This has encouraged further inquiry on specific East Asian business systems including what has come to be called Chinese entrepreneurial capitalism or more generally ‘Confucian capitalism’ (Baumol et al., 2007; Bond and Hofstede, 1990; Hamilton, 2006; Kotkin, 1992; Redding, 1990; Whitley, 1992).1 Confucian capitalism is thought by many to be a key mode of economic organization in East Asia not only because of its economic significance to local economies, but also because of its complex network organization and compatibility with the modern virtual organization (Ahlstrom et al., 2004; Chen, 2001; Redding, 1990; Whitley, 1992). Researchers have stressed the importance of Chinese culture, in general, and Confucianism, in particular, as a key explanation for this putatively unique business system in East Asia much in the way Max Weber’s (1951) ‘Protestant work ethic’ has been used to explain economic growth in the West (e.g. Kao, 1993; Redding, 1990; Seagrave, 1995; Weidenbaum and Hughes, 1996; Whitley, 1992). Indeed, the economies that have developed the most rapidly during the twentieth century are mainly Confucian-influenced East Asian ones, most notably those of Japan, South Korea, Hong Kong, Singapore, Taiwan, and Mainland China.2 Limited evidence asserts an association between (primarily Confucian) cultural...